The 6 Sneakers Michael Jordan Wore When He Became a Champion

Michael Jordan’s incredible career has been the subject of ESPN and Netflix’s docuseries, The Last Dance. While the majority of the show focuses on Jordan’s sixth and final NBA title in the 1997/98 season, The Last Dance also explores some of the GOAT’s defining moments throughout his career. Naturally, for fans at home, a lot of those moments are connected to what was on MJ’s feet.

The Nike Air Jordan 1 will likely go down as the most influential and defining sneaker of Jordan’s career. But it’s easy to forget he never hoisted the Larry O’Brien trophy in the style. Below, we take a look at the iconic Air Jordans he wore when claiming one of his six titles, what made them so special on the court, as well as off of it.

Michael Jordan won his first NBA Championship wearing the Nike Air Jordan 6. Designed by Tinker Hatfield and released in 1991, the sneaker is one of the most iconic in the Air Jordan range. Jordan wore the “Black Infrared” colorway of the Air Jordan 6 as he averaged 31.2 points, 11.4 assists, and 6.6 rebounds per game in the finals.

The “Infrared” colorway first retroed in 2000, with the most recent re-release coming in 2019. The sneaker was said to have been inspired by Jordan’s Porsche 911. (It would not be the first Air Jordan to take inspiration from one of MJ’s many luxury sports cars — more on that later.) Apparently, Jordan had had trouble putting on his previous signature models, so Hatfield designed the tongue to feature two holes and added a spoiler-like heel tab, which would allow MJ to pull the sneaker open more easily. 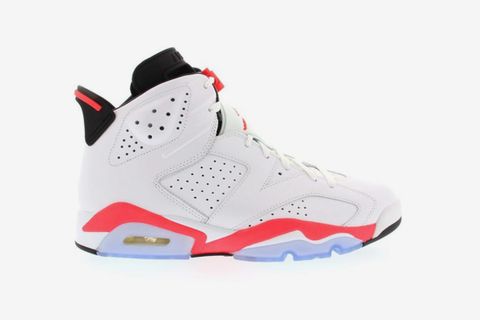 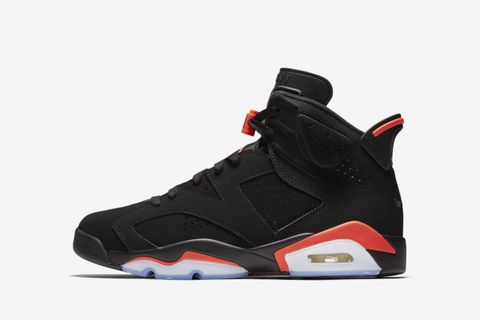 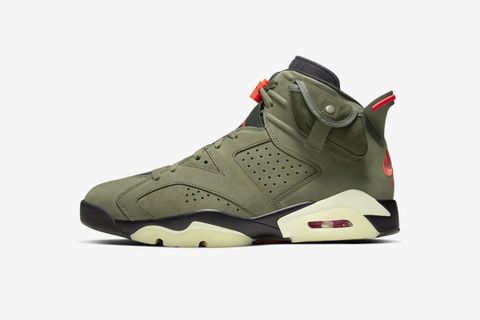 Though in hindsight it’s easy to say we should have never doubted the GOAT, the 6s came at a time when Michael Jordan’s ability to go all the way was questioned. Having been in the league for seven years, Jordan had yet to win his first title. The fact that MJ hadn’t won a ring (yet) weighed heavy on the legacy he was building. That all changed when the Jordan-led Bulls swept the Detroit Pistons in the Eastern Conference Finals en route to taking down Magic Johnson and James Worthy’s Los Angeles Lakers in the 1991 Finals. The Bad Boy Pistons had been a thorn in the side of Jordan’s early career and were the two-time defending champions at the time, making the title that much sweeter in solidifying Jordan’s place as one of the greats in the sport.

The Nike Air Jordan 7 was the shoe Jordan wore when he cemented his status as a global superstar and simultaneously inserted himself into GOAT discussions. 1992 was a hell of a year for him. Not only did Jordan win his second NBA championship in a row (putting him on par with other greats such as Magic Johnson, Larry Bird, and Isiah Thomas), he won regular season MVP and Finals MVP in addition to leading the USA to a gold medal at the 1992 Summer Olympics in Barcelona.

During the NBA Playoffs, Jordan laced up in the “Black/True Red” Air Jordan 7, which later became known as the “Raptor” colorway. The purple and red detailing on the predominantly black base matched the Toronto Raptor’s color scheme (though the team would only enter the league three years later, in 1995). 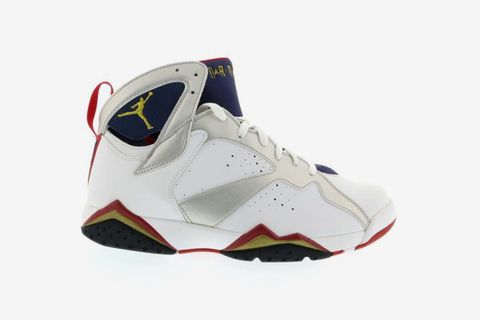 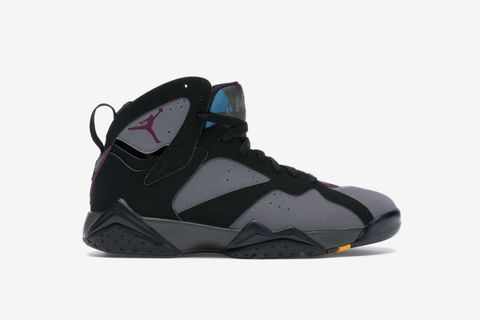 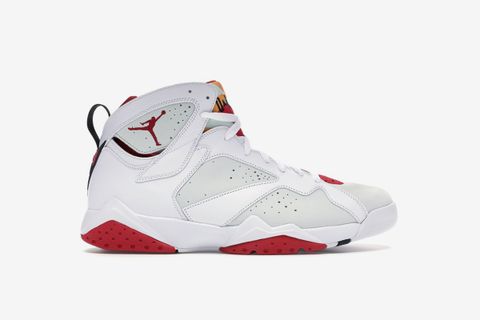 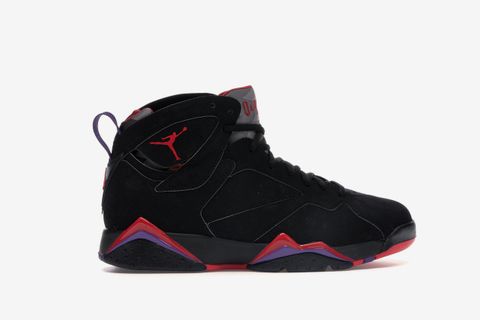 Although he won his second title in a row that year, it was at the Barcelona Olympics that Jordan really shone. He was part of the first American Olympic team to feature active professional players from the NBA. Known as the “Dream Team,” the roster comprised Larry Bird, Magic Johnson, Scottie Pippen, John Stockton, Karl Malone, and Patrick Ewing, to name a few. In short: the team was stacked and Michael Jordan and his AJ7s were the cream of the crop.

The Nike Air Jordan 7 was also the subject of a commercial featuring Warner Bros’ Bugs Bunny. It was released in a “Hare” Jordan colorway, inspired by everyone’s favorite Looney Toon. The commercial later became the catalyst for the production of Space Jam, cementing this sneaker’s legacy both on and off the court.

If Michael Jordan became a worldwide icon wearing the Air Jordan 7s, he became untouchable in the Nike Air Jordan 8 after winning his third NBA title in a row. The Chicago Bulls became only the third NBA team in history to win three championships in a row and Michael Jordan was the first player ever to win Finals MVP in each of the three title runs. 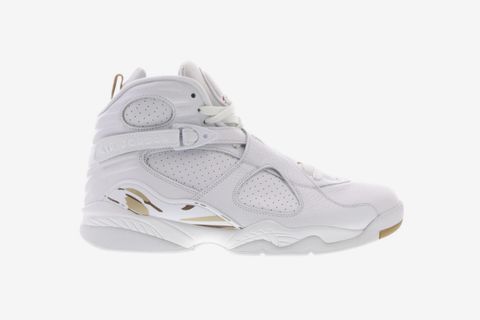 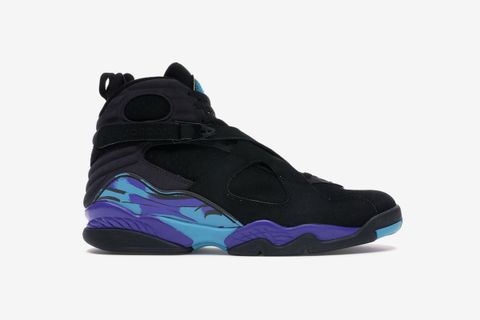 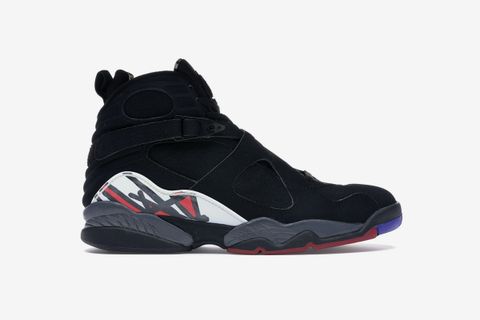 When Michael Jordan returned after his first retirement, halfway through the 1994/95 season, he wore the Air Jordan 10s until he was presented with the final design of the Air Jordan 11 later that spring. Nike had not given him the OK to wear the sneakers, but they impressed Jordan so much that he couldn’t resist lacing them up early. Jordan went on to don the Air Jordan 11 during the 1995/96 season as well, winning his fourth NBA title in them and kickstarting the second part of his Chicago Bulls dynasty.

Incredibly, Jordan exclusively wore the “Concord” colorway during the regular season — unfathomable nowadays, when NBA players regularly wear multiple pairs in a game. In the finals against the Seattle Supersonics though, Jordan switched it up and wore the “Bred” Air Jordan 11s, continuing a four-championship trend of always wearing a black and red pair to win the title. 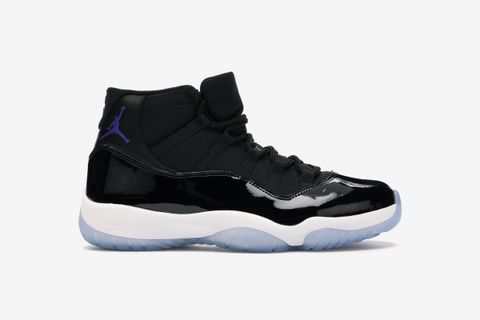 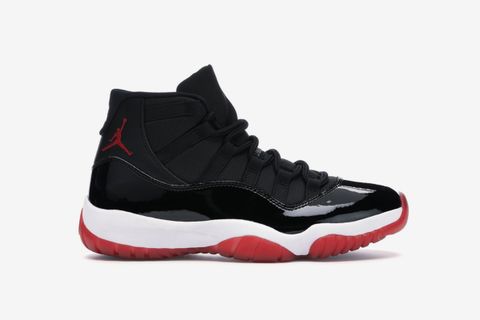 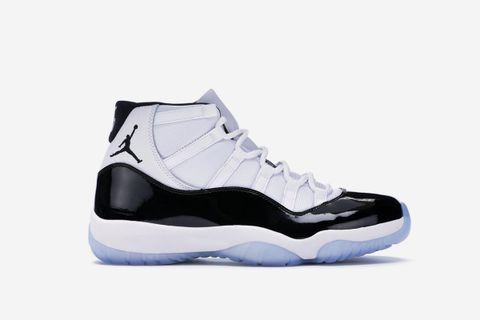 The 11, which again was designed by Tinker Hatfield, is also Michael Jordan’s favorite. It was the first time patent leather was used for one of Jordan’s signature sneakers and stands out from the rest of the Air Jordan series thanks to its largely non-traditional look.

Off the court, it reached legendary status when MJ wore the Nike Air Jordan 11 during Space Jam, a legacy which has had lasting effects. The Air Jordan 11 holiday release is Jordan Brand’s biggest-ever sneaker drop every year without fail.

The 1996/97 season and the Nike Air Jordan 12s that MJ wore during the NBA Finals that year gave us one of the most historic, Jordan-esque performances of all time: the flu game. Suffering a 103-degree temperature against the Utah Jazz, Michael Jordan scored 38 points, grabbed 7 rebounds, and dished out 5 assists en route to one of the most memorable sporting performances of all time. The black and red Air Jordan 12s MJ was wearing at the time went down in history and were dubbed the “Flu Game 12s” from then on. 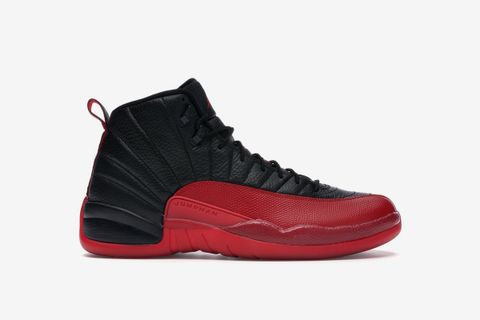 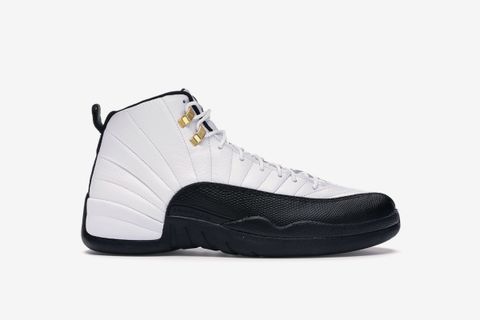 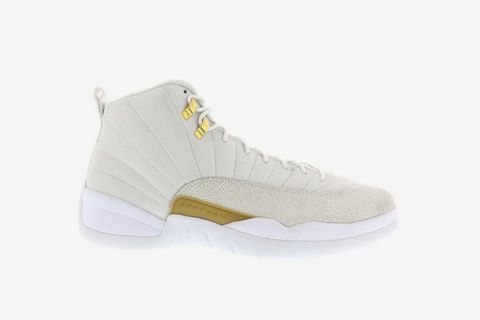 Jordan began the 1998 NBA Finals series against the Utah Jazz wearing that season’s signature sneaker, the AJ13, before switching into an early Air Jordan 14 prototype for Game 3. The prototype was given to Jordan by Hatfield, who asked Jordan not to wear it. Jordan liked the shoe so much, though, that he didn’t listen and wore it anyway.

Jordan proceeded to wear the Air Jordan 14 in Game 4 and Game 6 as well, scoring his famous “Last Shot” in the latter. Because the sneaker was not to be released to the public for another nine months (in March 1999), the hype and anticipation for the sneaker reached unprecedented levels. The black and red colorway he wore in the final game went on to be called “Last Shot” and is still one his most iconic to date, thanks in large part to Jordan’s on-court magic. 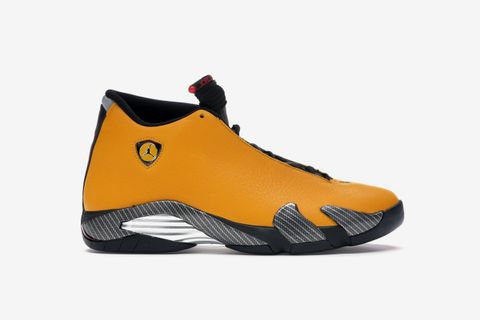 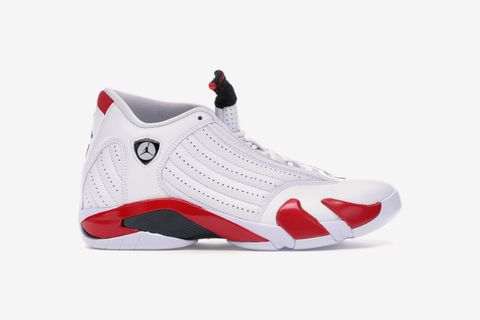 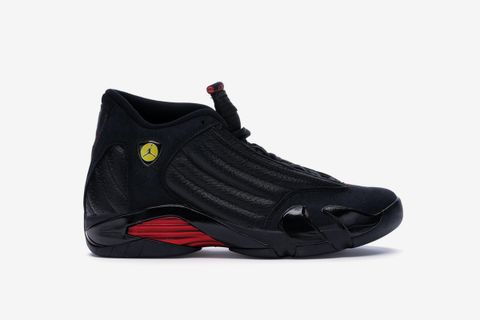 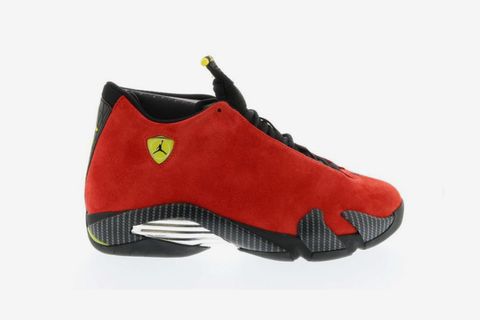 This sneaker was inspired by Jordan’s love for Ferraris, featuring a Jumpman logo that flipped the original Ferrari logo. It was lower cut than previous models and featured dual Zoom units, giving off a high-speed aesthetic. The Nike Air Jordan 14 was ultimately the last signature model worn by Michael Jordan while playing for the Bulls (he would later return from retirement a second time to play for the Washington Wizards) and is considered by many to be one of the most comfortable retro Jordans ever made.

To stay updated on everything happening in the sneaker world, follow @highsnobietysneakers on Instagram, check our sneaker release date calendar, and subscribe to our sneaker chatbot on Facebook to receive lightning-quick updates to your inbox.